(John wrote “Keep” on the cover of a Proceedings magazine featuring Admiral Chester W. Nimitz. John worked with Admiral Nimitz at the Navy Department after WW2.)

When John McCrea moved to our house, he did not come alone. He brought with him a Filipino steward named Pique, who had worked for him since his navy days, and 17 coffin-size wooden boxes of papers, uniforms, and memorabilia. All took up residence in our cellar, Pique in a renovated space in the old laundry; the boxes, in stacks on the cellar floor.
As a collector and keeper of stuff, John fit right into our family. None of the Tobeys ever threw anything out. This was forcefully brought home to me when, in my 40s, I helped empty our Chestnut Hill house before it was sold. In the attic, I was startled to discover my old toilet training equipment and the birdcage that was home to our canary, who died when I was ten. Still, when it came to saving papers and photographs, the Tobeys were amateurs compared with John.
John was an avid reader of correspondence, newspapers and magazines. When he found things of interest, he would pass them on to Mother to read. If he wanted her to return an item to him, he wrote on it in his compact but powerful script, “Keep.” If the item was particularly precious, he wrote something like “Keep, keep and keep!” These treasures accumulated in piles in his study, and in time some migrated to the wooden boxes.
During John’s lifetime, I had nothing to do with the boxes. I was dimly aware that when John dictated his memoirs, he referred to papers from the boxes to jog and supplement his remarkable memory. No doubt this contributed to the accuracy and completeness of his recollections. I knew that some of the navy materials were classified, and that he had had them de-classified before he used them. Beyond that I don’t know what papers he worked with.
After John’s death, my husband Ken and I undertook to sort through the papers in the boxes. The uniforms, decorations, and swords had long since been distributed. The boxes were a jumble, but what a fascinating experience it was to explore them. There were childhood drawings by, and letters from, his daughters, coins, folders of speeches, and reams of correspondence from his navy and John Hancock careers. We noted famous names in the correspondence files, but we didn’t have time to read, just to sort.
The photographs made the biggest impression. There were thousands of them, collected by John or sent to him by friends. There were pictures of what appeared to be German warships at the surrender of the German navy after WWI. There were shots in unusual formats of other unidentified ships and naval officers of ancient vintage. More modern pictures showed trips with FDR and the launch and early days of USS Iowa. We even found pictures of John with President Harry S. Truman and with a very youthful John F. Kennedy. As musicians, we were intrigued to find photos of conductors Andre Kostelanetz and Arthur Fiedler and singer Lily Pons, but there was no explanation of why John came to be photographed with them. While our photographic tour left more questions than answers, I came away with a powerful sense of the breadth of John’s experience and the importance of his career.
Postscript: We boxed up the papers and gave them to the Naval Historical Foundation. Some years later I was surprised to discover they had been neatly organized, cataloged, and transferred to the Manuscript Room of the Library of Congress. I kept the photos, at least for now. After all, I am a Tobey. 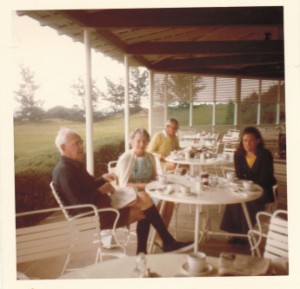 After retiring from the navy at the mandatory retirement age of 62, John McCrea worked in client relations for John Hancock Life Insurance Co. until he reached the company’s mandatory retirement age of 75. He began to record his memoirs in his early 80’s and continued to work on them for about ten years. One might well question the reliability of the memory of someone of such advanced years. However, having spent considerable time vetting John’s work, I can vouch for him.
At 80, John was a man of great vitality. Every morning without fail he performed a daily exercise routine. I often glimpsed him lying on his back on the floor–“on the deck” as he called it—doing leg bicycles in the air. Wary of the diabetes that ran in his family, he monitored his diet carefully. He loved to travel, he was a hands-on gardener, and he played the ancient Scottish sport of curling, which involves sliding heavy stones across the ice and vigorously brushing the path ahead of his teammate’s stone.
If anything, John’s mental acuity in his 80’s was even more impressive than his physical prowess. His memory was phenomenal. In telling of events long past, he described them with such clarity and detail that you felt that you were present. He remembered who was there, where he was standing, and what was said. On occasion, he would startle by stating that such-and-such event that had taken place some 50 or 60 years before had occurred on—say–a Tuesday. Of course, I had no way of knowing whether he was correct at the time, but in editing I found that these sorts of statements were invariably accurate.
In July 1969, when John was a mere 78, we watched Neil Armstrong walk on the moon on live TV. At the time, I recall thinking how much John had witnessed–the rise of telephones, the birth of the automobile, radio, airplanes, penicillin, radar, two world wars, and now space travel. He had personal stories about all and how they impacted his life. Likewise, he had vivid recollections of an astonishing number of public figures he had known or witnessed over the same period. These included William Jennings Bryan, Thomas Edison, FDR as Assistant Secretary of the Navy and as President, Justice Louis Brandeis, Winston Churchill, the terrifying Admiral Ernest J. King, and, a personal favorite, Wallis Simpson when she was married to her first husband (a naval officer) and to her third (the Duke of Windsor). The list went on and on. The more I knew of John’s stories, the more I came to think of on him as a sort of human reference work on the first half of the 20th Century.

As John’s attentions to my mother continued, I found it difficult not to be disarmed by his obvious enthusiasm for her. (I should note here that I refer to the Admiral as “John,” a privilege that was accorded me sometime later. At the time, like most others, especially the young, I called him “Admiral.”)

The widow Tobey, like her daughter, did not initially embrace the possibility of her remarriage. John, the boy two doors down the street, tackled this obstacle with what I now know to be his usual resourcefulness and determination. He was a gentleman of the old school, who opened doors and pulled out chairs for ladies. As would be expected, he wined and dined her and brought her flowers. Sometimes he brought spectacular dahlias he had grown himself in his backyard. Mother, an enthusiastic gardener, particularly appreciated these homegrown offerings.

But his attentions went considerably further. John was then a vice president of public relations for John Hancock Life Insurance Company, and he traveled frequently to give speeches for the company. From wherever he might be traveling, he always called her regularly, or wrote, if she was not reachable by phone. He sometimes brought her little presents from his travels. One that I still have is a small china box with the inscription “You are witty and pretty.” Inside is a tiny newspaper clipping from a 4-line column entitled Thought For Today. It reads: “Robert Burns said, ‘But to love her, love but her, and love forever.’” But most important, John repeatedly told Mother—and my older brother and me—what a wonderful person she was. The unabashed expression of such sentiments was a novelty in our tight-lipped New England household.

Any lingering misgivings about the marriage, if I had any, were quashed by John’s gesture after Mother consented to marry him. In celebration, he had a little metal plaque made up. It read, “On this spot she said ‘Yes,’” and gave the date. He would take it out every now and then, plunk it down on the actual site—the library sofa—and tell us how lucky he was that she had agreed to marry him. How could anyone resist a man who behaved like that? The plaque suggested the commemoration of military battles won, and perhaps it was meant that way. John once quipped to a friend that it been almost as hard to win the hand of Mrs. Tobey as it was to win the Second World War.

This blog consists of my thoughts, memories, and musings about John McCrea, a remarkable man who led an extraordinarily interesting life. It is based on my experience of the man as his stepdaughter for 25 years and on my work editing his memoirs. The blog supplements but does not duplicate the material in Captain McCrea’s War, available beginning November 15 on Skyhorse Publishing.