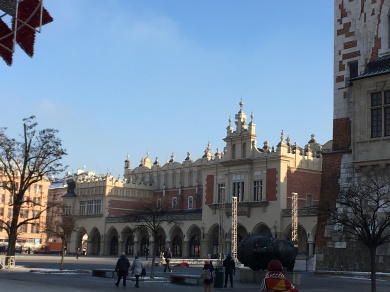 I recently spent ten days in Krakow, Poland, a beautiful city where the ghosts and disputes of WW II still linger. This is the first of two blogs about Krakow’s noteworthy history.

Krakow is in southern Poland east of the border between the Czech Republic and Slovakia. Settled in the 7th Century, the city has a long and remarkable history as a center of trade, culture, architecture, and academics. Like much of Poland, it was invaded many times from the east, and the Polish language, with its spiky clusters of unpronounceable consonants, owes much more to Slavic languages than to Latin.

From the 11th to the 16th centuries Krakow was the capital of the Kingdom of Poland. Its Jagiellonian University, the 2nd oldest university in Central Europe, was founded in 1364, and astronomer Nicolaus Copernicus (who posited that the earth orbits the sun) studied there in the 1490s. One of the early Polish kings was hospitable to Jews, and the city developed a significant Jewish population.

Krakow’s beautiful architecture survived WW II due in part to the quick action of its mayor. Shortly after Germany invaded Poland on 1 September 1939, he declared Krakow an open city, and the following day, September 6th, the Germans took over. While Germany annexed portions of Poland outright, Krakow was in territory administered as a colony and source of forced labor by the Nazi’s General Government, a division of the Third Reich. Hitler’s lawyer, Dr. Hans Frank, was appointed head of the General Government, and he ruled from Krakow’s Wawel Castle, once home to Polish kings.

Under Frank’s brutal regime, Krakow’s Jews were moved from the city into a walled ghetto, and subsequently deported to extermination camps. Oskar Schindler (depicted in the movie “Schindler’s List”), a Czech industrialist and Nazi, operated an enamelware factory in Krakow. Nazi connections and bribes enabled him to save the lives of some 1,000 Jews by employing them in his factory. Another Krakow resident, a very young Roman Polanski (the film director), escaped the ghetto and survived.

When Soviet forces took Krakow on 18 January 1945, the city once again avoided much physical damage. As the war ended, the Soviet Union assumed control of Polish elections and government. Eventually, the Polish People’s Republic was formed, a Soviet-dominated government that suppressed intellectual and academic life and continued until 1989.

And how does Ludwig van Beethoven fit into this picture? Beethoven himself never set foot in Krakow. However, his music—specifically, a priceless collection of autograph manuscripts of his work—resides in the city. How that collection came to Krakow and why it remains there today is a fascinating WW II story of stealth, secrecy, shifting national boundaries, and war-related grievances that continue to this day. This remarkable tale will appear in part 2 of this blog.

While John McCrea was never in Poland or Europe before or during the war, the events that took place there were certainly part of “his world.” Before the German invasion of Poland, John was the executive officer (second in command) of the battleship USS Pennsylvania, the flagship of the U.S. Fleet, based in the Pacific. John followed world events closely. He was aware of Japanese aggression and conquest in Asia and the increasing tensions in Europe. He believed the U.S. might be drawn into war and spent considerable effort on war training and trying to focus the men of Pennsylvania on planning for war. Few, including senior officers, thought the U.S. would go to war. Germany’s invasion of Poland in 1939 and the breakout of hostilities in Europe only strengthened John’s belief that U.S. involvement in war was a distinct possibility. He proved to be prescient.

On January 30, 1943 on the return trip from the Casablanca Conference, President Roosevelt celebrated his 61st birthday in an unusual venue, aboard a Pan Am Clipper flying from Trinidad to Miami. The event was organized on the initiative of John McCrea during the journey to Casablanca. There were champagne toasts, a birthday cake, and the president received a gift, a book of prints showing scenes of Trinidad, where the presidential party had had overnight layovers on the way to and from North Africa. It was the first time—and possibly the last—that a president of the United States had celebrated his birthday in the skies.

On 24 January 1943, at the conclusion of the Casablanca Conference, President Roosevelt and Prime Minister Churchill held a joint press conference. Seated in chairs on a beautiful sunny day, with the correspondents spread out on the lawn before them, the two leaders discussed what had been accomplished during the conference. The president spoke first. Near the end of his remarks he stated:

“…I think we have all had it in our hearts and our heads before, but I don’t think that it has ever been put down on paper by the Prime Minister and myself, and that is the determination that peace can come to the world only by the total elimination of German and Japanese war power.

“Some of you Britishers know the old story—we had a General called U.S. Grant. His name was Ulysses Simpson Grant, but in my and the Prime Minister’s early days, he was called “Unconditional Surrender” Grant. The elimination of German, Japanese and Italian war power means the unconditional surrender by Germany, Italy, and Japan. That means a reasonable assurance of future world peace. It does not mean the destruction of the population of Germany, Italy, or Japan, but it does mean the destruction of the philosophies in those countries which are based on conquest and the subjugation of other people. 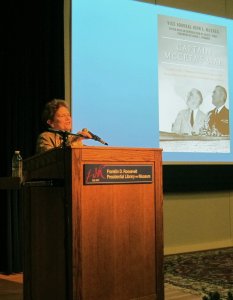 This past week I had the honor of giving a book talk about Captain McCrea’s War at the FDR Presidential Library and Museum. The date was Wednesday, December 7th, 2016, the 75th anniversary of the Japanese attack on Pearl Harbor. At the beginning of my talk, I read John’s story from Chapter 1 about what he did on Sunday, December 7th, 1941. I have always felt this account was one of the most powerful of the memoir.
At the time, John was a senior aide to Admiral Harold R. “Betty” Stark, the chief of naval operations. John learned that Pearl was under attack when he went to cash a check at the Army Navy Club in Washington, and he departed immediately for the Navy Department. He spent the afternoon listening in on Admiral Stark’s telephone calls from Pearl Harbor about the damage and writing up longhand memorandum summarizing the calls.
The calls were made by Admiral Claude C. Bloch, commandant of the Fourteenth Naval District in Honolulu, Hawaii. Neither Stark nor Bloch was sure whether the phone line they were using was secure, and both understood that damage information could have great value to the enemy. To me, the anguish of that terrible afternoon was captured in the poignant plea of Admiral Block at the end of one call, when he remarked, “If anyone other than Admiral Stark and I have overheard this conversation, I beg them, as loyal citizens, to keep the nature of this conversation to themselves.”
After my talk, a group of us toured the featured exhibit at the FDR Museum, “Day of Infamy, 24 Hours That Changed History.” This excellent exhibit, which runs through the end of the year, tells the moment by moment story of what was going on at the White House during the Pearl Harbor attack up to and including FDR’s delivery of his famous Day of Infamy address to Congress. The exhibit starts with FDR receiving the news of the attack and drafting his own press release about it because it was Sunday, and no one was around the White House but Harry Hopkins, who lived there. It includes audio of Mrs. Roosevelt making the first radio announcement of the attack during her previously scheduled radio broadcast. The original edited first draft of the Day of Infamy speech is on display with the typed words “world history” crossed out and replaced in pencil with “infamy” in FDR’s hand.
Thinking back on my afternoon in Hyde Park, I have the sense that the Washington of December 1941 has mostly faded into the mists of time and forgetfulness. However, two Washington locales remain with us. The top floor of the Navy Department and the nearby White House are still as crisp and three dimensional as they were on Pearl Harbor Day, courtesy of John McCrea’s memory and the research and ingenuity embodied in the Day of Infamy exhibit. 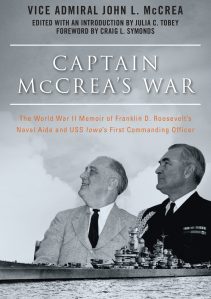 Please come by and say hello if you are in the area.

For more information, go to this link – https://fdrlibrary.org/events-calendar